XRP Analysis: 2 Reasons Why Prices Suggests A Once In A Lifetime Opportunity

If this sounds like something that happened to you, do not worry because you are not alone. Many people in this crypto market feel the exact same way and this is because they are paying attention to all the wrong clues prices give them.

Here at Beyond The Hodl we focus on making high probability decisions at key levels where we believe the Smart Money — whales — will enter the market. Using our Smart Money concepts we have proven its one of the best and most reliable ways to forecast the market with more consistency and accuracy than most.

These levels of high probability always begin with a move counter to the direction you want to see prices go. The reason for this is that the whales have such large positions they cannot buy on up moves. They must fool the majority into selling to them at a low cost so they can take the counter position.

This will then lead to an aggressive move higher which will get the retail (small players) involved and excited about the move. They will try to ride the trend when its already too late and they will end up buying the selling from what the whales had bought at the low.

This cycle will then rinse and repeat over and over again. This is what creates the flows and ranges that we see in the market.

This may sound elementary and simple and that is because it is. Yet, 99% of the people in this market still do not use this simple idea to profit from the market.

So what does all this have to do with #XRP?

If we understand the theory of how the Smart Money/Whales put money into the market as I explained above, you can see why this makes for a very exciting and once in a lifetime opportunity!

Lets breakdown why I believe this to be true.

If we look at the last major move that happened on the #XRP/BTC chart we can see that the parent range was formed during the Dec – Jan move higher, in which prices moved 1500%!

Notice there was a move lower leading up to the December low. To us this would mean that there was massive buying as prices went lower into this low.

We have to imagine that if there was a move in the market that lead to such a large move — in this case 1500% higher — then we have to qualify this area as one of the highest probability ranges of the entire chart.

The key with understanding this knowledge is that the move lower in which we assume the Smart Money bought into will be the zone/level that we want prices to come back to before we decide to make another decision to buy.

But why is this?

Think about what happened at that zone as prices went lower. Smart Money was willing to buy up until the point they had filled their entire position. After this the market had an exponential rally and they stopped buying as we explained above.

So where do you think they will be willing to buy again?

If you guessed where they bought previously then you are correct!

We would expect them to defend the level they previously bought at so they will wait for prices to come back down in order to re-accumulate.

Using Smart Money Price Delivery Theory, one of our favorite tools here at Beyond The Hodl which you can learn by taking our FREE course, we will approximate how we could of known to wait until Q3 in order to see a potential reversal in the market.

The pictures above — taken from our free telegram channel — explain my thought process on June 20th as we had some very important stuff happening when it comes to our #SMPDT theory.

The first part of the theory states we should focus more on predicting how the CANDLES will close instead of trying to predict solely on PRICES. This is a HUGE mindset shift because most people forget that candles are the footprints of the behavior from what investors/traders believed about the market at that moment in time.

Fast-forward to today and we can see that the idea that I had explained happened perfectly. When looking at quarterly candles we expected more follow through to the downside because it had taken 90 days to create the Q2 candle.

We did not expect that many days of price action and strong important resistance levels to be wiped away with just 10 days left of the quarter.

The second part of the theory is currently forming right now. Which is a combination of reason #1 and #2.

It states that not only do we need to wait for the new candle to open but we also want to see the move of that new candle be driven into a range (in this case a bullish range) so that we can find interested buyers to push the prices higher.

When combining all these ideas together we can start get a clearer picture as to why #XRP/BTC is at a very important and crucial point in its journey and why we can potentially see another once in a lifetime rally that will bring us back to the joyful memories of pre 2018.

Feel free to let us know your thoughts on this article!

Get Notified Of New Articles

You have Successfully Subscribed!

Co-Founder of Beyond The Hodl 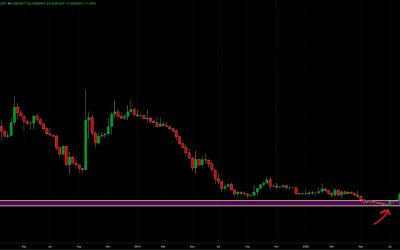 XRP Analysis: 2 Reasons Why A 200% Move Is Expected

Here at Beyond The Hodl we focus on making high probability decisions at key levels where we believe Smart Money — whales — will enter the market. Using our Smart Money concepts we have proven its one of the best and most reliable ways to forecast the market...